Updates to George's profile since your last visit are highlighted in yellow. 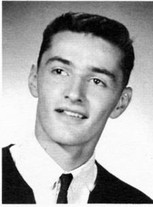 Lived with my family in Park Forest (Mantua St.) from 5th grade thru H.S.... Went to Mohawk Elem, Blackhawk Jr. High, and Rich East. Joined the wrestling team in H.S., and my heroes were Marty Lyman (upperclassman state champ) and Bobby Campbell. Accepted the wrestling team award at the 65 school assembly, and was so nervous that I forgot to pass it to Alan Zall..he was PO'd..Loved wrestling, but never took it up again. Enjoyed the bonfire events every fall...dated Susie Halperin one summer (she was a real sweetheart), took Kathy Wiegand to the prom senior year..had a great time on the train to Carbondale. There are several classmates I would really like to see again, but I never seem to make it to the reunions.
After 1965 grad., went to U. of Arizona for 2 years, then joined the Army to learn how to fly and serve in VN... graduated flight school in 1968, flew in VN til June of 1970, became a flight instructor and examiner thru the years, and finished my BS degree while in the service. Traveled the world in those 26 yrs, flew 6000+ hours, and met a lot of fun people. Raised 2 daughters, and also 2 stepchildren with Leslie, my 2nd wife. Retired from the U.S. Army in 1994, and went to nursing school for 4 years, then decided to get back into the transportation business. I and am still driving as a retirement job. It's fun and rewarding.
My neighbors from 5th grade thru H.S. were Ramona, Beanie (delivered newspapers to her house), Dierdre, Linda
Hart (next door), Howie Mowat (2 doors down)
I really loved P.F. and those years..visited only 2 times since then, and was overwhelmed by nostalgia. Wish I could turn back the clock and do it all over again!!!

I'm sorry to hear about Doug.I didn't know him very well, but I liked him

HAPPY BIRTHDAY, CARLOTTA...Hope you had a wonderful day!!!

George Mintz
George Mintz has left an In Memory comment for Mr. Phillip A. Mundt.

Mr. Mundt was one of the few teachers I really remember. I enjoyed his class a lot, and learned a lot from him!

George Mintz
George Mintz has left an In Memory comment for Carla Durkee.

I took Carla for a ride on my motorcycle once. She fell off the back, but wasn't hurt...we laughed, and enjoyed the memory. I'm very said that she is gone.

George Mintz
George Mintz has left an In Memory comment for Michael Gothberg.

Michaeland I became friends senior year. He was a lot of fun to be with, and we did some fun things together

Happy belated birthday wishes, big Al !!! You and I have history all the way back to elementary school...wow...Hope you had a great day, fellow aviator!!!